Most Successful Medium enterprise in the Dubrovnik Neretva County

DT Croatia -Dubrovnik Travel DMC, has again been nominated for the prestigious “Zlatna Kuna” Award, presented by the Croatian Chamber of Commerce, this year as the most successful MEDIUM enterprise in the Dubrovnik Neretva County for the year 2014.

DT Croatia won the “Zlatna Kuna” for the most successful small enterprise in the year 2010, Followed by one more nomination in 2011. “Zlatna Kuna” (named after the Croatian currency Kuna also meaning marten) is the award given for success in business and contribution to the Croatian economy.

The idea of this award was created as an aspiration that the economy takes on characteristics of the marten, a symbol of endurance, cleverness and cunningness, but also prosperity and fertility. The first Zlatna Kuna was awarded in 1993 as a symbol of success and quality in business. 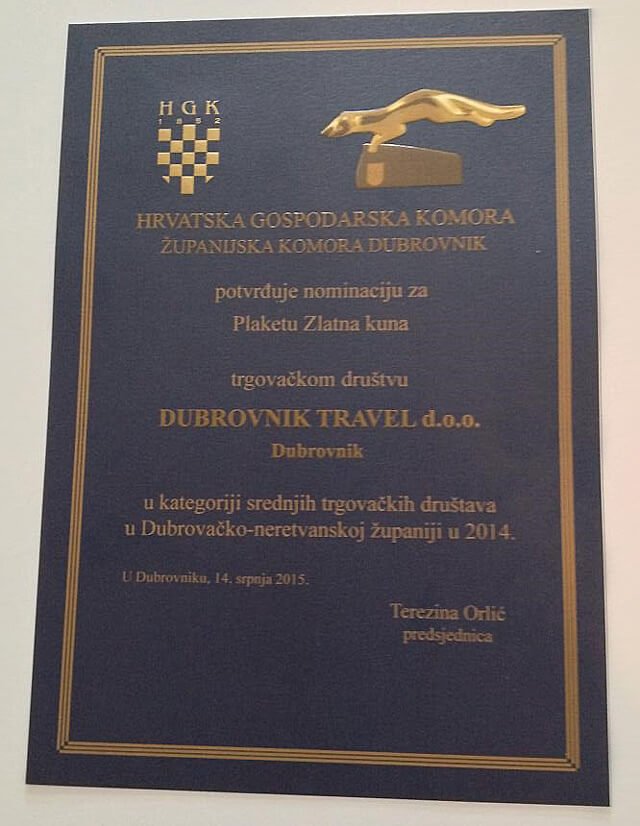 Candidacy for this prestigious award is exclusively based on excellence in business that is valued based on previously identified indicators. This year nomination is confirmation of our hard work and business excellence – all handled and operated by the DT Team! A special thanks to all our clients that have trusted in all our services.